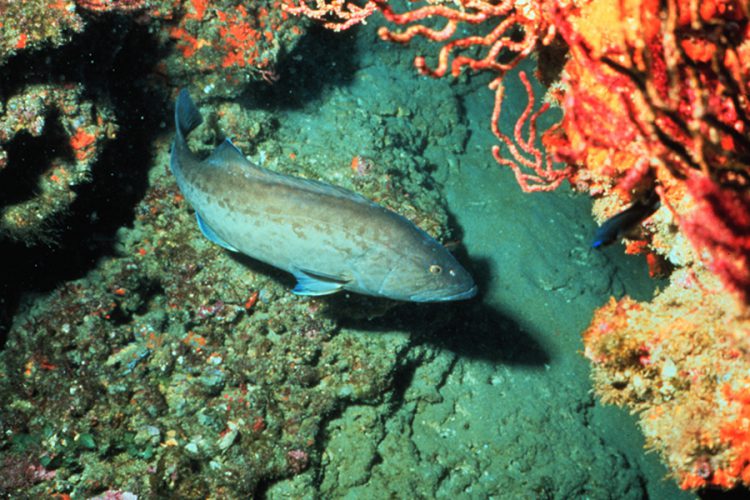 Gag grouper are an iconic species on Florida’s Gulf Coast. They are both predator and prey and, because of their unique life cycle, they are subject to shifting ocean currents and other ecosystem processes.

Gag grouper are also prized by recreational and commercial fishers. Every three to five years, catch limits for gag grouper are recommended by the Gulf of Mexico Fishery Management Council. This decision occurs after the Gulf Council’s Scientific and Statistical Committees (SSC) put forth a recommendation.

While the Council and SSC consider a variety of relevant information when making recommendations, detailed data about the influence of ecosystem processes on fish stocks are not always available. But for the 2022 gag grouper stock assessment, research on ecosystem trends was front and center.

“Incorporating ecosystem considerations into stock assessments can be a real challenge,” said Dr. Skyler Sagarese, research ecologist for the Southeast Fisheries Science Center within NOAA Fisheries. “You need a hypothesis at the beginning, then collect the data, validate the results, and have these results and your associated conclusions go through a technical review. It’s really a whole process, which is where I think Dave’s project is great because it’s one of the ways that we have tried doing that from the beginning.”

Dr. David Chagaris is the lead investigator of a project focused on integrating information on ecosystem processes and predator-prey interactions into fisheries assessments and management in the Gulf of Mexico.

Chagaris, a research assistant professor at the University of Florida, has been on multiple sides of the stock assessment process. He has worked in the field analyzing stomach contents of coral reef fish in Florida, as part of the stock assessment group at Florida Fish and Wildlife Conservation Commission’s Fish and Wildlife Research Institute, and as an architect of an ecosystem model for the west Florida shelf.

“Down the road, obviously, we’d like to get to more ecosystem-based management where we can look at tradeoffs and multiple species at the same time and how you manage the system as a whole,” he said. “But right now, the management system isn’t ready for that, and I don’t think the models and advice that we could give are quite mature enough yet either.”

He and his team, which includes Sagarese, were awarded more than $1 million by the NOAA RESTORE Science Program in 2017 for this work. His team is currently focused on building models that consider red tide impacts on the Gulf gag grouper stock, helping managers make informed decisions on catch limits.

The model currently includes 82 groups – from the decomposing organisms at the bottom of the food web to top predators. For managed species like gag, the model divides the fish up into groups based on their age, which can be important when a factor impacts juveniles differently than adults. For other species that are not explicitly managed, there may be only one group that represents an entire species or, in some cases, similar species may be grouped together. While the emphasis is on managed species, each time the team runs the model, it generates information for all 82 groups.

Young gag grouper are often found nearshore, taking refuge in seagrasses. As they age into adults, they move offshore. When a red tide occurs, it can hit juvenile gag grouper hard and has, in the past, led to major die-offs.

“You see the population just drop, and so if we don’t account for those removals from the system we might think that the population is larger and can sustain more catch when it can’t,” Sagarese said. “It’s really important for us to recognize the issue but then to quantify it as well.”

Without Chagaris’ data, stock assessment decisions on the impacts of red tide would be based on “ballpark assumptions” rather than empirical data.

“That has really been the missing piece in the past,” Sagarese said.

Sagarese believes the integration of Chagaris’ data into stock assessment decision making is a good example to emulate with other assessments as well.

“I think this one is a pretty clear story: we know what the issue is, we know it causes mortality, and so I think this is a good case study,” she said. “The other assessments we do in the southeast, we don’t really have any of these ecosystem considerations as inherent in a base model as we do with this.”

Nurturing these types of interdisciplinary collaborations that work to connect academic researchers to government are crucial, Sagarese said.

“The government, the National Marine Fisheries Service, we just don’t have time and resources to run out and develop the ecosystem models and get all of this work together given our operational workloads. It really is a team effort,” she said. “With more calls to incorporate more ecosystem considerations, we can only do so much, so we have to maximize our efficiencies in working with others.”

After Chagaris’ model was considered by the SSC last November, the Gulf of Mexico Fishery Management Council was presented with a recommendation. The Council has the ultimate authority to make decisions on catch limits for the species. Their projections are typically made for three to five year periods but can be reassessed more frequently when necessary. Considering the effects of red tide on gag grouper is likely to lead to a more conservative catch limit recommendation by the Council because they are accounting for the gag grouper that likely died during recent red tide events, Chagaris said.

Chagaris is a member of the SSC and has maintained open communication with the group since the project first began.

“I think when the SSC saw the results, they were much more comfortable because they have followed the process, they have seen all the improvements that Dave has made to the west Florida shelf model,” Sagarese said. “So I think when they saw this work being used to inform the gag grouper assessment, the SSC felt they had all the tools to make the best decision.”

Chagaris added that it was also important for his team to work through the “proper channels” throughout the stock assessment process, such as contributing to the data workshop and working with the stock assessment analysts to incorporate estimates of red tide mortality. His time in stock assessment undoubtedly aided in his understanding of the process, he said, and he encourages all ecosystem modelers to get the same hands-on experience.

“I think you have to understand the management process, the decisions they are likely to make, and how they make those decisions,” Chagaris said.

While the integration of Chagaris’ data bodes well for future ecosystem-based modeling efforts, Chagaris said the models are only useful if data are available to support them, specifically predator-prey interactions and other food web data, as well as sampling and monitoring data for species and communities that are not well studied.

“We can generate these ecosystem models and they are providing good advice, but for them to really be useful and be used more regularly going into the future, we need to build the data collection programs to support them, just like we do for stock assessments,” he said. “There’s a lot of knowledge gaps and data gaps that could help improve the models.”