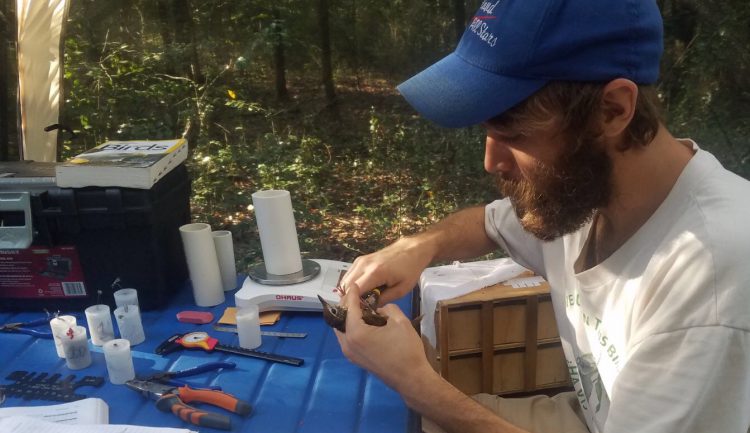 Did you know the same data used to create weather forecasts can also be used for migratory bird conservation? Researchers at the U.S. Geological Survey, the University of Southern Mississippi, University of Delaware, and the U.S. Fish and Wildlife Service with support for the NOAA RESTORE Science Program are pairing weather radar data with one of the largest on-the-ground data-collection efforts to monitor songbirds on migration in the northern Gulf of Mexico. Habitats in this region provide the last stopover and the first landfall for songbirds migrating to and from North America by flying across the expanse of the Gulf of Mexico.

However, resources at these migration stopovers may be insufficient, thereby limiting migratory bird populations and contributing to their overall decline. A recent article in the journal Science estimates a net loss of three billion birds in North America, or 29% of 1970 abundance.

To assist land managers who have to make decisions about how best to conserve habitat that is being used for stopovers by migratory birds, project researchers are developing a computer model to determine the energy needs of songbirds and the resources available to them along their routes using data from two weather radar stations and six stopover sites in Louisiana and Alabama. The researchers are using the archival weather radar data to gather important information on how the birds are moving through the northern Gulf of Mexico. In addition to the atmospheric data used to create weather forecasts, the weather radar captures data that meteorologists screen out, such as movement of airborne creatures like birds, bats, and insects.

Using nightly weather radar data during the migratory seasons (March – May / August – November), the researchers look for bird movement during the clear evenings. From this, the researchers are able to determine how many, and for how long, songbirds stop in a particular location. Stopover locations can be categorized into three categories: fire escapes – short-term stops with limited resources to provide temporary rest; convenience stores – sites that provide enough food and shelter for birds to refuel and move on to better habitat; and hotels – extensive areas of suitable habitat that allow birds to prepare for sustained flights.

Using the computer model, the researchers will pair the data on bird movement captured by the weather radar with on-the-ground site surveys to determine the amount of potential food sources available to birds at different locations and what that means for the number of songbirds the stopover locations could support. This will help them answer the question: Do the stopover sites provide adequate resources to migratory songbirds? Researchers intend to use the computer model to extrapolate their findings over a larger area, eventually including locations between radar data sources. Ultimately, they will be able to create a region-wide map of migratory songbird stopover habitats and resource availability to gauge if stopover habitats are adequately supporting birds. In addition, this map will allow land use managers to identify locations whose conservation would provide the greatest benefit to migrating songbirds.

The researchers have also encountered some novel findings that require further study, such as snails that could be using the birds as a form of animal transport and birds captured by spider webs.

Next time you see a flock of migrating birds, you’ll know weather radar is tracking them too. Now will you ever look at the daily weather report the same way again?

Image Note: Any use of trade, firm, or product names is for descriptive purposes only and does not imply endorsement by the U.S. Government.