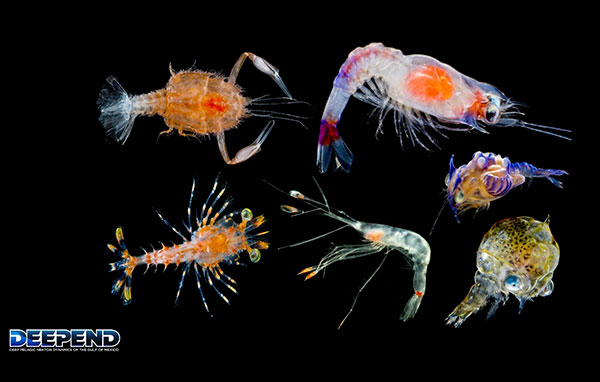 When thinking about the Gulf of Mexico, coastal resources tend to come to mind: oysters, beaches, wetlands. However, there is a whole other set of resources and ecosystem services offshore in the open ocean that make the Gulf of Mexico such a dynamic and productive ecosystem. With support from the NOAA RESTORE Science Program, Tracey Sutton and his team are shining a light on the animals that live in this pelagic portion of the Gulf. Specifically, the team is expanding an existing set of data to more fully understand trends in faunal populations in the pelagic and assess links between this pelagic habitat and the rest of the Gulf of Mexico.

After the Deepwater Horizon oil spill in 2010, the Gulf community identified a need to quantify and establish a baseline for the deep-pelagic habitat. In 2015, DEEPEND (DEEp PElagic Nekton Dynamics) was established as a 5-year, 102-member, 19-organization research consortium supported by the Gulf of Mexico Research Initiative (GoMRI). DEEPEND members continued and expanded upon a time series of collections begun shortly after the spill as part of the Natural Resources Damage Assessment that quantitatively characterized the deep-pelagic Gulf communities. DEEPEND continues its research, now with the support of the NOAA RESTORE Science Program, but with the added focus of how to directly apply their results to resource management in the Gulf.

DEEPEND has discovered a remarkably diverse community of fishes, pelagic crustaceans, cephalopods, and jellyfish in the open Gulf. The team has identified over 1,2000 species, over 200 of which were unknown in the Gulf before the project began and many new to science altogether. For fishes, one in nine species now known in the Gulf was discovered in the last 10 years as part of DEEPEND. According to Sutton, even in the last two months (the most recent survey), the team continues to discover fish species not previously known to be in the Gulf.

However, in the wake of the Deepwater Horizon oil spill, Sutton’s team has seen pelagic fauna populations plummet. In the four years following the spill, declines were larger and faster than anywhere else in the oceans. This is not only a concern for the stability and persistence of deepwater communities, but also for the ecosystem services they provide. For example, important, managed species are known to depend on deep-pelagic resources. Tuna, marine mammals, and endangered birds rely on pelagic organisms as an important food source. Additionally, deepwater communities are important for carbon sequestration. At night, deep-pelagic fauna migrate to shallow water, consume carbon, migrate deep again, and then release the carbon through waste or respiration. This is known as the biological pump, and deep water communities play a crucial role in reducing atmospheric carbon. If these communities are plummeting, it puts the Gulf at an uncertain inflection point.

With support from the Science Program, Sutton and his team will be answering the question of whether the deep-pelagic Gulf has fundamentally changed and what this might mean for habitats elsewhere in the Gulf that share a connection with the deep-pelagic. For example, DEEPEND has discovered that juvenile reef fishes are ubiquitous in the open Gulf; could this be an important source of reef fish recruits? Additionally, they have found possible links between pelagic prey resource declines and oceanic cetacean declines or relocation. DEEPEND data describing faunal distributions could provide key management insights into marine mammal behavior. With oil drilling and extraction continuing in the Gulf and expanding to deeper and more technically challenging areas, the possibility of additional oil spills that could threaten the deep-pelagic persists. This puts greater importance on establishing a community baseline and monitoring how this deep community continues to respond to the Deepwater Horizon oil spill. With this information, Sutton and his team can help guide damage assessment and response in the event of future spills.